Storms are coming but they aren't from Earth, they are from the sun. These solar storms are putting out a huge amount of radiation that could affect radios, power grids and satellites. The radiation shouldn't affect us though. 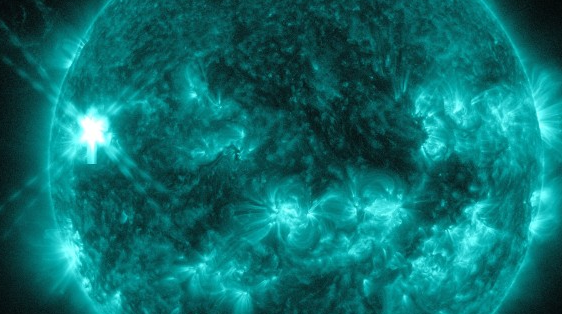 According to experts the 2 solar storms should arrive to Earth on Saturday. The Space Weather Prediction Center will issue a a strong geometric storm watch.

People on Earth shouldn't be affected by the solar storms but they can knock out power and interfere with GPS and radio communications.

Although the solar storm can interfere with our technology, it creates a beautiful aurora. The aurora should happen Thursday and Friday night, but it won't be easy to see if you're in a major metropolitan area.

Scientists classify strong solar flares according to a three-tiered system, with C flares being the weakest, M flares medium-strength and X flares the most powerful.

Wednesday's X1.6 flare qualifies as intense, but is far from the strongest blasted out by the sun this year. For example, our star fired off a monster X4.9 flare in February. (X4 flares are four times as powerful as X1 flares.)

The sun is currently at or near the peak phase of its 11-year activity cycle, which is known as Solar Cycle 24. But our star has been relatively quiescent during Solar Cycle 24, whose max phase is the weakest in about 100 years, scientists say.

NASA's Solar Dynamics Observatory is one of several spacecraft regularly monitoring the sun to track space weather events and their potential risks to astronauts and satellites.