Strange creatures called Velella velella have washed ashore California beaches. They are not jellyfish but they are jelly-like cratures. Another name for them is "by-the-wind sailors" because they have a clear fin that sticks out from their blue, oval body. 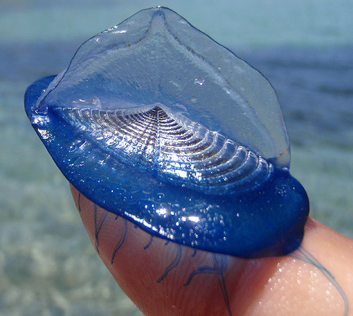 "Every now and then, the currents and the winds will change and these guys will, instead of being pushed out to sea, they actually wind up on the beach," said Bader. These creatures started showing up around Washington, Oregon and later in San Francisco.

Velella velella sting to catch their food but the sting is not very potent so humans shouldn't get hurt. The sea-creature uses its tentacles, that are like a jellyfish, to catch plankton and fish eggs. The creatures float on top of the ocean leaving them at the mercy of the wind and the current.

"A lot of people probably never knew an organism like this existed in the world," Bader said. "And you know the winds change, and all of a sudden they wash up on shore and we get to see what the ocean is really made of."