Astronomers using NASA's Hubble Space Telescope have unexpectedly discovered the most distant galaxy that acts as a cosmic magnifying glass. Seen here as it looked 9.6 billion years ago, this monster elliptical galaxy breaks the previous record-holder by 200 million years. 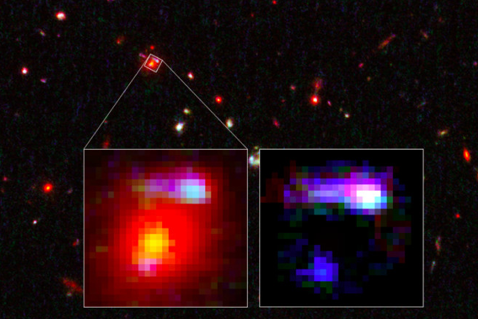 These "lensing" galaxies are so massive that their gravity bends, magnifies, and distorts light from objects behind it, a phenomenon called gravitational lensing.  Finding one in such a small area of the sky is so rare that you would normally have to survey a region hundreds of times larger to find just one.

The object behind the cosmic lens is a tiny spiral galaxy undergoing a rapid burst of star formation. Its light has taken 10.7 billion years to arrive here and seeing this chance alignment at such a great distance from Earth is a rare find. Locating more of these distant lensing galaxies will offer insight into how young galaxies in the early universe build themselves up into the massive dark-matter-dominated galaxies of today. Dark matter cannot be seen, but it accounts for the bulk of the universe's matter.

Team members Kenneth Wong and Sherry Suyu of Academia Sinica Institute of Astronomy & Astrophysics (ASIAA) in Taipei, Taiwan, used the gravitational lensing from the chance alignment to measure the giant galaxy's total mass, including the amount of dark matter, by gauging the intensity of its lensing effects on the background galaxy's light. The giant foreground galaxy weighs 180 billion times more than our sun and is a massive galaxy for its time. It is also one of the brightest members of a distant cluster of galaxies, called IRC 0218.

The team suspects the lensing galaxy continued to grow over the past 9 billion years, gaining stars and dark matter by cannibalizing neighboring galaxies. Tran explained that recent studies suggest these massive galaxies gain more dark matter than stars as they continue to grow. Astronomers had assumed dark matter and normal matter build up equally in a galaxy over time, but now know the ratio of dark matter to normal matter changes with time. The newly discovered distant lensing galaxy will eventually become much more massive than the Milky Way and will have more dark matter, too.

The distant galaxy is too small and far away for Hubble to determine its structure. So, team members analyzed the distribution of light in the object to infer its spiral shape. In addition, spiral galaxies are more plentiful during those early times. The Hubble images also revealed at least one bright compact region near the center. The team suspects the bright region is due to a flurry of star formation and is most likely composed of hot hydrogen gas heated by massive young stars. As Tran continues her star-formation study in galaxy clusters, she will be hunting for more signatures of gravitational lensing.