Harrison Williams, twenty-six years old, was an a boating excursion off the coast of Western Australia with his friends. 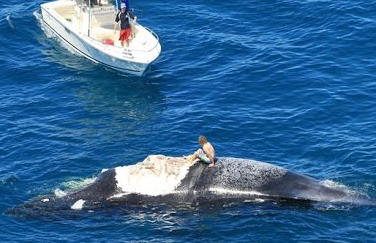 Williams and his friends came across a rotting whale carcass.

His friends thought it would be funny if he would "surf" on the whale. So he jumped in the water and swam to the carcass.

While he was on top of the carcass his friends' amusement did not last long when they saw sharks swimming and eating the whale's flesh.

There were reports of several tiger sharks and at least one great white shark surrounding the whale carcass.

The man did safely got off the carcass.

His parents were not thrilled of what he did. 'Mum thinks I'm an idiot'

He agrees with them and says he's pretty grateful to still be alive.

Other Articles Of Interest:

Other Videos Of Interest: